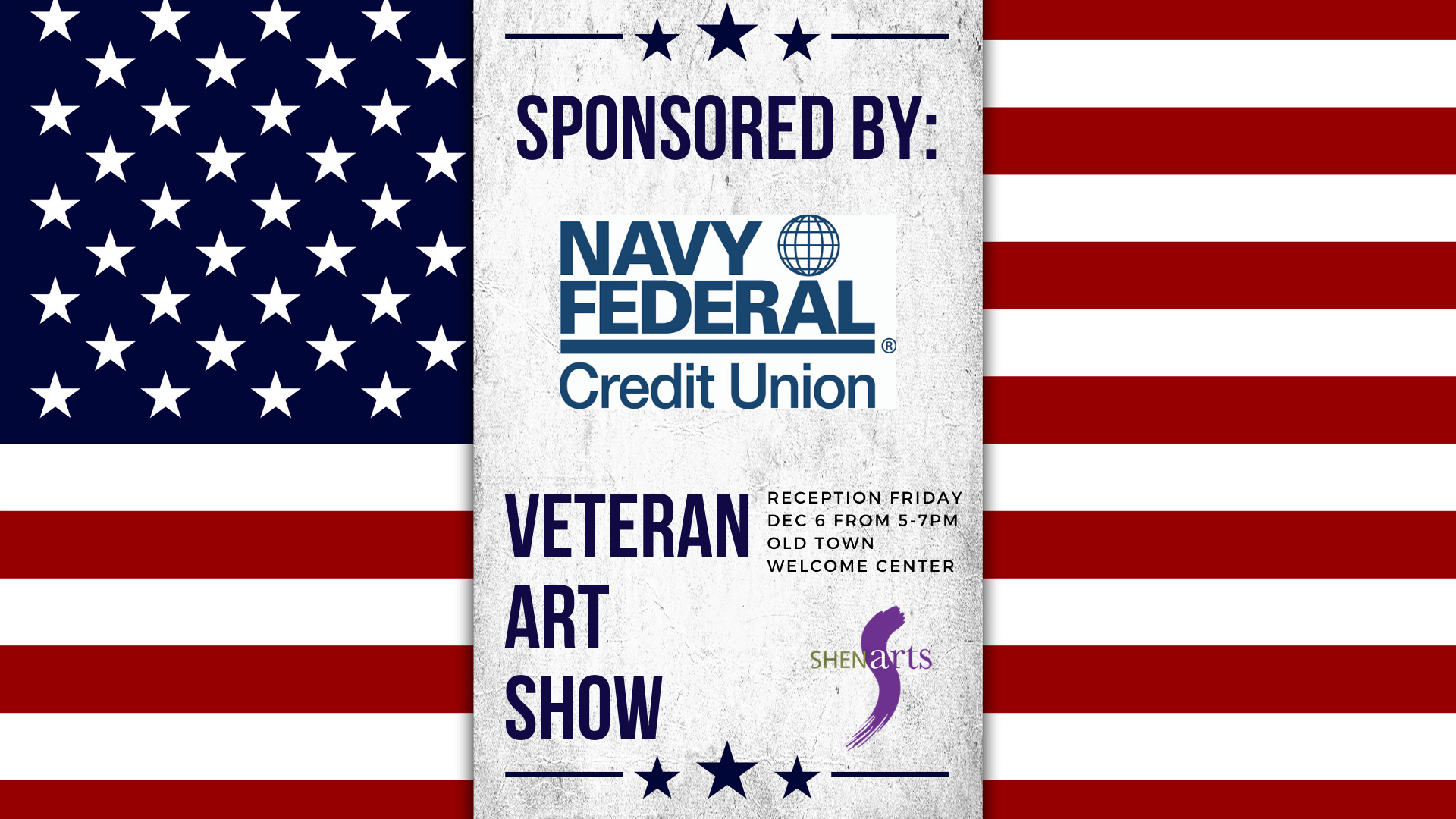 Each November, Veterans Day is celebrated across the country to celebrate former members of the armed forces and the significance of the sacrifices they have made. ShenArts is proud to present this juried exhibition of work from local veteran artists as a part of that celebration. The display will hang for the months of November & December in the Old Town Winchester Welcome Center at 33 E Boscawen St., Winchester, VA. Join ShenArts for the Artist Reception at the Old Town Welcome Center on Friday, Dec 6 from 5-7pm. Exhibit sponsored by Navy Federal Credit Union.

Michael Chapman is a US Navy veteran, 1995-1999, who has always loved the arts and studied art history while at college. He enjoys oil painting and drawing with pencil. Michael is a big fan of comic books and pop culture and often incorporates elements from both into his work. His wife introduced him to Perler bead art several years ago and he has been creating pieces in this medium for the past three years.

Rod Erickson enlisted in the Marine Corp at the age of 17 through the delayed entry program and attended infantry training and training in motor transport at Camp Pendleton, Ca. After training, he served with the 3rd Marine Division, 1st Armored Assault Battalion based in Okinawa Japan. During his time there, he supported multiple deployment efforts for Operation Desert Storm and deployed to Korea for Operation Team Spirit. He also deployed with the Marine Air Ground Task Force on two back to back Humanitarian Aid missions. His last duty station was at Quantico Virginia where he was honorably discharged after which Rod went on to college, earning a bachelor’s degree in geography.

Ron Light was commissioned as a second lieutenant in the US Army Corps of Engineers after graduating from Penn State University in 1981. He served as a combat engineer in Germany and throughout the United States. He holds master degrees from the University of Virginia and the United States Naval War College. He commanded the Honolulu, Sacramento, Middle East, and Baghdad, Iraq, US Army Corps of Engineers districts, and the Transatlantic Programs Center, located in Winchester, Virginia. He retired in 2011 as a Colonel after a 30 year career, and now makes custom furniture and cabinetry near Boyce, Virginia.

Tina Mahon’s love for art began at a very early age when a local elementary school art teacher invested her time and talent with Tina. With her guidance, Tina began to see the world in a

different way. The creative foundation built in elementary school became a healing tool she used to overcome and deal with complex trauma. She enjoys expressing her artistic vision in various ways and places. While living in Savannah, GA, she shared the beauty of the area through photography at monthly artist markets and as a member of an artist co-op. After years of moving, she is pleased to be back in her hometown sharing art that represents how broken pieces can still be beautiful. (Military Service: US Army active duty 1994-1997, US Army IR 1997-2002)

Nate McCafferty was a Marine Infantryman from 2001-2009 and was wounded in Iraq by an IED. In 2009, he became a Marine Explosive Ordnance Disposal Technician, tasked with defusing bombs in Afghanistan. In 2015, he became specialized in countering nuclear weapons, teaching at the Defense Nuclear Weapons School until he retired from the Marine Corps at the end of 2017 as a Master Sergeant. He now teaches at Boulder Crest Retreat in Bluemont, teaching Post Traumatic Growth to combat veterans and their families.

Susan Merila is a largely self-taught artist for whom art is a vital part of her life. During her college years, as she raised a family, and during her 23-year career as an Army Intelligence Officer, art did not take center stage. Since then, that has changed greatly and making art, studying art, and spending time with other artists has allowed Susan to grow her craft further her own career as an artist, including becoming a certified watercolor instructor.

Kenneth Peyko served in the USAF from 1969-1971 and was trained as an Air Force medic. He was assigned to Malcolm Grow Medical Clinics and Surgery Center, a United States Air Force medical treatment facility located on Joint Base Andrews, Maryland. He spent his entire career at Malcolm Grow Hospital working in their emergency room as a technician. Kenneth has been a photographer for many years and particularly enjoys macro photography.

ShenArts’ mission is to bring art to the people and people to the art; make the arts accessible and enrich the community of the Northern Shenandoah Valley with diverse and immersive arts experiences for people of all ages.

CANCELLED – Art as a Business Workshop